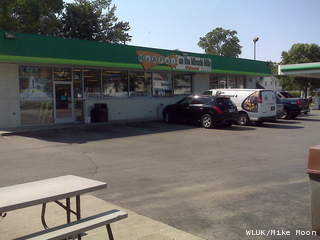 Great news for those who head to “Miracle Mile” in Fond du Lac.

Earlier this week, the owner of Ma & Pa’s convenience store, 506 S. Main St., announced plans to close. The store, however, has been sold and will reopen under a new name.

Jeffery Korneli has bought the property and says he will reopen it as Korneli’s Main Street Express. Korneli already owns another convenience store in Fond du Lac. Officials have already approved Korneli’s licenses to sell soda and cigarettes. He is still waiting on a liquor license.

City of Fond du Lac native and city councilman Jeremy Thiesfeldt of 604 Sunset Lane announced today
that he has filed his candidacy papers to officially enter the contest for the 52nd District seat in the
Wisconsin State Assembly. A three-term Fond du Lac city councilman and three-time vice president of the
council, the 43 year-old Thiesfeldt is seeking to fill the seat that is currently held by Representative John
Townsend, who announced in October that he is retiring and would not seek reelection.
“Mr. Townsend has served the 52nd District faithfully since 1998. His community, state, and country owe a
debt of gratitude for his 45+ years of public service in varying capacities. I would be honored to have the
citizens cast their votes to select me to fill this position,” said Thiesfeldt.
When elected, Thiesfeldt will work to restore a conservative, common sense philosophy to the state
government. The welfare of Wisconsin families will be an important part of his platform. “I have enjoyed
my years on the city council and was proud to share in accomplishments with my colleagues and city staff.
I have been urged to run for state assembly and am prepared to continue as a citizen-servant in Madison
representing the hard-working taxpayers of the 52nd district. I will work to return relative autonomy to local
government without interference from Madison and Washington. I will be Fighting for the 52nd to cut
government costs and spending, bring jobs back to our community, and dismantle the inefficient
bureaucracy that stifles our entrepreneurial atmosphere. But, above all, we must together rekindle a spirit
of personal responsibility, family values, and love of God and country that have been a strength of this
community for 150 years.”

Victory 2010 Chairman Cunningham says, “Jeremy understands that small businesses are the engine that
drives our economy; I appreciate his willingness to listen and his desire to improve and grow our
community. His leadership has been evident on a number of tough issues, and his resolve to challenge the
status quo when necessary has been clear.”

When Mercury Marine reversed course last week and allowed the union an opportunity at a re-do on proposed contract changes the question was why?  Another question thought by many and asked by Jerry Bader on his blog was “did somebody sweeten the pot?”  While it may never be known by the public what changed in the package, Mercury Marine is being offered a pretty sweet deal when it comes to incentives by local officials in Fond du Lac.

Local government is committed to providing a significant amount of financial assistance — up to $50 million from Fond du Lac County and $3 million from the City — as incentive to keep Mercury Marine in Fond du Lac.

Following are some details of the incentive packages local leaders unveiled:

So how does Fond du Lac county plan to finance this $50 million?

The County Board of Supervisors will decide Wednesday night whether to finance a $50 million loan with a new county sales tax or through property taxes. A half-percent sales tax — the first ever for Fond du Lac County — is being proposed as the preferred option by Fond du Lac County Executive Allen Buechel. (Source: City, county officials offer Merc $53 million – FDL Reporter)

The proposed sales tax would pay for the credits apparently.

The sales tax would be used to cover the $500 and $1,000 job credits. The loan would be issued by the Fond du Lac County Economic Development Corp., and the life of the loan is 12 years. There is no sunset provision.

“We spend tax dollars on a lot of things that are less important than job creation,” said James Buchen, vice president for governmental relations at Wisconsin Manufacturers & Commerce, a business lobbying organization. “At least in this case, (taxpayers) know what it is going for.” (Source: Half-cent sales tax would help pay for Mercury incentives – JSOnline)

At least the union had an opportunity to vote on concessions, residents apparently won’t have a say when it comes to the incentive package & likely sales tax increase to fund it.

Is this large of an incentives package truly needed? The net gain of jobs over the seven years of the contract is minimal.

So folks in Fond du Lac should provide $53 million in incentives to Mercury for what could ultimately be no “new” jobs or at most 200 “new” jobs by 2016?  And yes those numbers of 0 and 200 are correct because recalled workers shouldn’t constitute “newly” created jobs.

So there are credits for jobs, what qualifies as a $1000 credit?  Does the job have to be newly created?  Or will a “recalled” worker returning to work at Mercury qualify as a “created” job?

With or without more specifics on the details, $53 million in incentives to Mercury Marine from officials in Fond du Lac is just too much.  The county board and city council should vote down these incentive packages. Why? Mercury said if the union didn’t accept the contract proposal it would leave. It never said incentives were a part of it – at least publicly. Would Mercury break it’s word if the packages weren’t approved? Besides could Mercury afford the public relations nightmare that would ensue?

One final question – when will the state release details of the incentive package they are still negotiating with Mercury Marine.

That about sums it up after the union got an undeserved 3rd opportunity to vote on contract concessions & accepted them.

As a result, Mercury said it will begin this year to consolidate manufacturing work in its Fond du Lac facilities.

A vote count was not released by the union, but officials of the International Association of Machinists (IAM) and Aerospace Workers on Friday evening confirmed that the two-day voting process resulted in union ratification of the proposal.

Consolidation of work in Fond du Lac will include transition of work from the company’s Stillwater, Okla., facilities over the next 18 to 24 months.

Don’t get me wrong, this is good news for Fond du Lac and the rest of Wisconsin.  However it’s not difficult to see that in the process Stillwater, OK got the shaft from Mercury Marine.  If I was from the Stillwater area I’d probably tell Schwabero to stick it where the sun don’t shine, that his words of thanks are meaningless.

“Our employees in Stillwater and Fond du Lac, as well as the communities and the states of Oklahoma and Wisconsin, have been very supportive throughout this challenging period,” Schwabero said. “In both locations, community and business leaders as well as our employees have done everything possible to help ensure a sustainable future for Mercury Marine. We want to thank each of them for their commitment and focus, particularly during these last two months.” (Source – Mercury accepts “yes” vote on contract proposal – FDL Reporter)

Ultimately by reversing course and allowing this vote the last two days, Mercury showed it had no intentions of moving to Oklahoma.  If it did it would have held to the “hard” deadline.  The fact is union members had ample opportunity to review the proposed changes & make an informed vote – which they did August 23rd.  They should have had to live with that decision. But because the company doesn’t practice what it preaches in terms of ethics it reversed course 48 hours after announcing in a press release that the deadline had been firm & the union hadn’t accepted the proposed changes, so it was moving operations to Stillwater.

“People should be reminded that there was another town, that we are very compatible with, in Oklahoma anxiously awaiting the results” of the vote, Fleming said.

“Frankly, it would be unethical to tell Stillwater that there was a schedule and a set of conditions for negotiations and then throw it all out the window because the union in Fond du Lac chose not to allow its members to vote” in a timely fashion. (Source: Mercury says 2nd vote too late to save jobs – Milwaukee Journal Sentinal)

Guess those words rang hollow and were meaningless in the end.  Wonder if Mercury Marine officials will ever honestly explain to those in Stillwater, OK why.